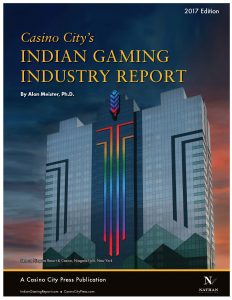 In the latest edition of the Indian Gaming Industry Report, Nathan Associates Principal Economist Dr. Alan Meister finds that U.S. Indian gaming experienced strong growth on a nationwide basis in the calendar year, 2015 (5.5%), more than doubling that in 2014 and surpassing its pre-recession growth rate for the first time. This was the sixth straight year of growth following the Great Recession, leading to a new all-time high of $30.5 billion in gaming revenue in 2015.

Non-gaming amenities continued to expand at many Indian gaming facilities.

In 2015, non-gaming revenue grew approximately 4.5% to an all-time high of $3.9 billion. Altogether, the $34.4 billion in gaming and non-gaming revenues were generated by 242 tribes operating nearly 357,000 gaming machines and 7,700 table games in 494 gaming facilities in 28 states. Notably, Indian gaming’s growth outpaced that of the U.S. economy in 2015 (gross domestic product grew 2.5% and per capita disposable personal income grew 3.1%).

While Indian gaming grew in the vast majority of states in which it existed (24 of 28), there was a wide disparity in performance across states, varying from approximately +16% in Texas to -14% in Wyoming. Furthermore, gaming revenue was highly concentrated among:

Indian gaming also continued to have a significant economic impact on surrounding communities and the general economy. Its total contribution to the U.S. economy, including both direct and secondary impacts, totaled approximately:

About the Indian Gaming Industry Report and the Author

The Indian Gaming Industry Report is the most comprehensive, up-to-date economic study of Indian gaming available.

Please click here for background on the report, or visit www.indiangamingreport.com.

For a more detailed summary of the 2017 edition of the study, please see the executive summary.

For over 17 years, Dr. Meister has conducted extensive research and analysis of the gaming industry, including Indian gaming. His research and analyses have been relied on in matters before the U.S. Department of the Interior, United States Supreme Court, and the World Trade Organization. He was also commissioned by the National Indian Gaming Commission to independently analyze the economic effects of proposed changes in Indian gaming regulations. Dr. Meister’s work is frequently cited in the press, and his studies are a trusted resource for government and regulatory agencies, investors, and the gaming industry itself, as well as associated industries. In 2014, Dr. Meister’s annual Indian Gaming Industry Report was also cited by the U.S. Supreme Court in its decision in Michigan v. Bay Mills Indian Community et al.