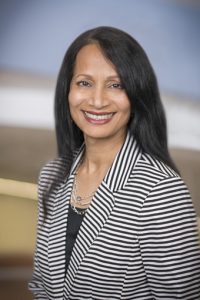 Usha serves as the Chief Operations Officer of Internews. Internews is a non-profit that empowers people worldwide with the trustworthy, high-quality news and information they need to make informed decisions, participate in their communities, and hold power to account. Usha leads the organization in the next phase of its development and strengthens Internews’ ability to support independent media in 100 countries around the world. In this role, she is responsible for financial management, security, facilities, human resources, and information technology.

Usha earned a bachelor’s degree in English literature from St. Stephen’s College in New Delhi, India and a World Executive MBA from George Washington University in Washington, DC. She has also completed graduate programs and is an alumna of the Stanford University Graduate School of Business and the Northwestern University Kellogg School of Management.

Usha has served on several for-profit and non-profit Boards. She is currently on the Board of Nathan Associates, an international economic consulting organization. She is a strong advocate for education and is a supporter of a number of charitable organizations geared toward bettering youth through structured enrichment programs. Just a few of her philanthropic involvements include serving on the Boards of India International School, a well-established Northern Virginia Indian American education and cultural center and a recent start-up called RENEW (Reform Education for a New World).

Usha was a 2016 Honoree of the Women Who Mean Business and was awarded Non-Profit CFO of the Year for Innovation in 2007.