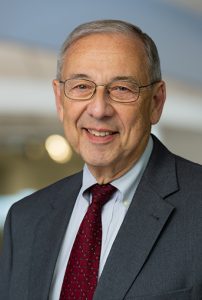 Dr. Edward H. Bersoff is currently Chairman of Parabilis, LLC a business finance company located in Northern Virginia. He is also the Chairman of Greenwich Associates, LLC, a business advisory firm.  He was formerly the Chairman and CEO of ATS Corporation, a publicly traded (NYSE-AMEX: ATSC) Northern Virginia based company serving the information technology needs of the Government and private sectors.  ATSC was acquired in March, 2012.

Dr. Bersoff was previously Chairman, President and CEO of BTG, Inc., an information technology firm he founded in 1982. The company’s common stock was listed on the NASDAQ National Market. In November 2001 BTG was acquired by the Titan Corporation, a NYSE listed company. Dr. Bersoff was elected to the Board of Titan in February 2002. Titan was sold to L-3 Communications in August, 2005.

Dr. Bersoff holds A.B., M.S. and Ph.D. degrees in mathematics from New York University and is a graduate of the Harvard Business School’s Owner/President Management Program. In 2007 he was awarded the Association for Corporate Growth National Capital Chapter Lifetime Achievement Award, and in 2014 he was named Outstanding Director by the Washington Business Journal for his chairmanship of the Holy Cross Health System.