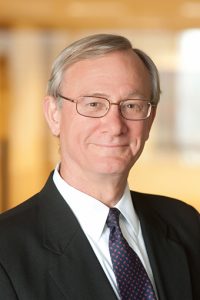 James Wallar is a Senior Advisor for economics, trade, fiscal policy, and finance. He was Senior Vice President of the firms’s International Group from 2010 to 2014. After retirement he was the chief of party for the first year of the Leadership in Public Financial Management II project.  From 2006-2007, he was chief of party and resident trade specialist for the firm’s ASEAN-US Technical Assistance and Training Facility at the ASEAN Secretariat in Jakarta. Back at headquarters in 2008, he managed the $150 million ADVANCE project in Southeast Asia.

In 2009, Mr. Wallar was the U.S. Treasury Attaché at the U.S. Embassy in Baghdad, where he led 20 civilian and military experts—the Public Financial Management Assistance Group—in tackling budget and financial issues with the Government of Iraq, provincial governments, and the Central Bank of Iraq. He was honored with the Commander’s Award for Distinguished Public Service and the Secretary of Treasury’s Honor Award at the end of his one-year assignment.

Mr. Wallar had a distinguished career with the U.S. Treasury Department—first as an economist with the Office of Tariff and Trade Affairs, then as Deputy Director of the Development Policy Office, and finally as Director of the Office of Trade Policy. He developed and coordinated trade policies, including negotiating positions for the Uruguay Round and NAFTA, and for bilateral and regional issues with respect to the EU and Asian countries. He was the U.S. Treasury Representative for European Affairs in Frankfurt for five years and was the Treasury Attaché to Russia, Germany, and Switzerland. During the Tokyo Round, Mr. Wallar was a USTR trade negotiator with the Geneva delegation.

Mr. Wallar negotiated the first GATT import licensing agreement, led the U.S. Government economics and investment team as a Minister Counsellor at the U.S. Mission to the OECD in Paris, and was a senior advisor to the Afghanistan Reconstruction Group in Kabul.